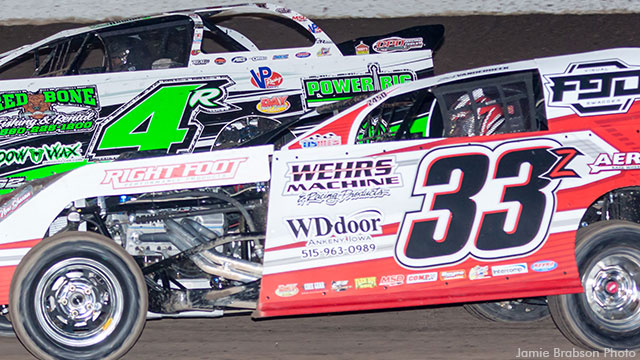 The clay-chucking chariots of the United States Modified Touring Series head into a tripleheader this weekend for the 21st Annual Winter Meltdown presented by Barnett Harley-Davidson at the Southern New Mexico Speedway in Las Cruces, N.M.

Originally slated to kick off this Thursday, extremely cold weather forecasted for that day has prompted officials to move the show back one day, so racing action will now take place this Friday, Saturday and Sunday, March 6-8.

With eight events already in the books for the USMTS Casey’s Cup powered by S&S Fishing & Rental, the Land of Enchantment will become the Land of Excitement as just one driver will leave the Southern New Mexico Speedway on Sunday as the champion of the MVT Gulf Coast Border Region presented by Day Motor Sports and the chance at a $150,000 payday at the end of the 2015 campaign.

“We are looking forward to the best modified drivers in the world coming to the Southern New Mexico Speedway, and we’ve got a whole new racing surface waiting for them,” said the track’s General Manager, Rue Stone. “We’ve brought in more than 50 loads of new clay and reshaped turns one and two. It should make for some great racing for our fans.”

Last year in the USMTS debut at the lightning-fast high-banked clay oval, hometown hero Stormy Scott capped off the regional championship with his first-ever victory in the Winter Meltdown. He led for only about 200 feet during the 40-lap main event as he nipped his twin brother, Johnny Scott, at the finish line.

Street Stocks, Limited X-Mods and Mini-Sprints will also be in action all three days. Gates open at 5 p.m. with racing at 7 p.m. on Friday. Gates open at 3 p.m. on Saturday with the first heat race going green at 7 p.m. On Sunday, gates will open at 1 p.m. with hot laps at 3 p.m. and racing to follow.

Grandstand admission is $10 on Friday, $12 on Saturday and $15 on Sunday while kids ages 10 and under get in for free every day. Pit passes are $40 each night.

Despite the chilly forecast, an open practice is slated for Thursday night, March 5, from 6-9 p.m. Admission to the grandstands is free while pit passes are just $20.

For those unable to attend this weekend’s clash in person, all three nights will be carried live via pay-per-view. Visit www.SpeedShift.tv for ordering information and don’t miss a single lap of the unforgettable action at the 21st Annual Winter Meltdown presented by Barnett Harley-Davidson.

The Southern New Mexico Speedway is located 11 miles west of Las Cruces at the Southern New Mexico State Fairgrounds. Take exit 132, go left and take the frontage road south of I-10 heading west. For more information call 575-524-7913 or 505-524-7913 or visit www.snmspeedway.com online. You can also check us out on Facebook at www.facebook.com/SouthernNewMexicoSpeedway and follow us on Twitter at www.twitter.com/SNMSpeedway.