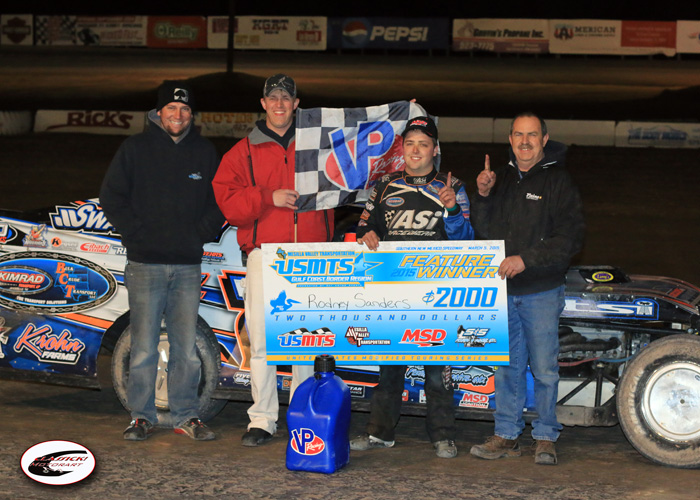 Defending USMTS National Champion Rodney Sanders found the new shape and surface of the Southern New Mexico Speedway to his liking Friday night, and drove away from the field to capture the opening round of the 21st Annual Winter Meltdown presented by Barnett Harley-Davidson.

“It is awesome,” Sanders said about the new clay surface and widened corners at the facility. “The track is smooth and slick from top to bottom, so I think they did a great job on it. I’m looking forward to the next couple of nights.”

Sanders, 25, was looking forward to the checkered flag Friday night when the yellow flag waved as he was motoring through the final turns, erasing a huge advantage for the Happy, Texas, superstar and setting up a green-white-checkered finish.

“I felt like I was a sitting duck out there; I felt like I was way too loose out there tonight, but I guess we were good enough” he said. “I saw Cade (Dillard) on the board, and he’s a good racer, and (Terry) Phillips too so I really didn’t know what was going to happen there.”

What happened was Sanders got a smooth restart, fended off Dillard’s peek underneath in the first corner, and then sailed away to a $2,000 payday and his 47th career United States Modified Touring Series main event win.

Dillard collected runner-up honors in his 2014 ride after destroying a new car two weeks ago in Baytown, Texas.

“I was telling ‘Unit’ (Grant Snider, Sanders’s crew chief) that we consistently run second, so maybe I’ll start considering that a win,” Dillard exclaimed following the race. “We’ve got a lot of second places—especially a lot of them to Rodney.”

Meanwhile, Phillips steered his back-up car the long way around the high-banked 1/3-mile clay oval to a third-place finish.

“It’s coming around, we just haven’t raced it much,” Phillips said. “We had to give it a little TLC this week over at Royal’s (Jones) shop. Every car needs a little something different, and this car here has been through the ringer, but not too bad of a run so we’re on the right track.”

Dereck Ramirez finished fourth and moved into the top spot in the points for the MVT Gulf Coast Border Region.

Jason Hughes was fifth, Ryan ‘The Reaper’ Gustin passed a dozen drivers en route to a sixth-place finish, Fito Gallardo wound up seventh, Casey Arneson was eighth ahead of his brother, Austin Arneson, who claimed the ninth spot and now trails Ramirez by seven points with two races left to decide the regional championship.

The 21st Annual Winter Meltdown presented by Barnett Harley-Davidson continues on Saturday and Sunday, with $3,000 going to Saturday night’s winner and $4,000 set aside for the winner of Sunday’s finale.

Street Stocks, Limited X-Mods and Mini-Sprints will also be in action both days. Gates open at 3 p.m. on Saturday with the first heat race going green at 7 p.m. On Sunday, gates will open at 1 p.m. with hot laps at 3 p.m. and racing to follow.

Grandstand admission is $12 on Saturday and $15 on Sunday while kids ages 10 and under get in for free both days. Pit passes are $40 each night.

For those unable to attend this weekend’s clash in person, all three nights will be carried live via pay-per-view. Visit www.SpeedShift.tv for ordering information and don’t miss a single lap of the unforgettable action at the 21st Annual Winter Meltdown presented by Barnett Harley-Davidson.

The Southern New Mexico Speedway is located 11 miles west of Las Cruces at the Southern New Mexico State Fairgrounds. Take exit 132, go left and take the frontage road south of I-10 heading west. For more information call 575-524-7913 or 505-524-7913 or visit www.snmspeedway.com online. You can also check us out on Facebook at www.facebook.com/SouthernNewMexicoSpeedway and follow us on Twitter at www.twitter.com/SNMSpeedway.