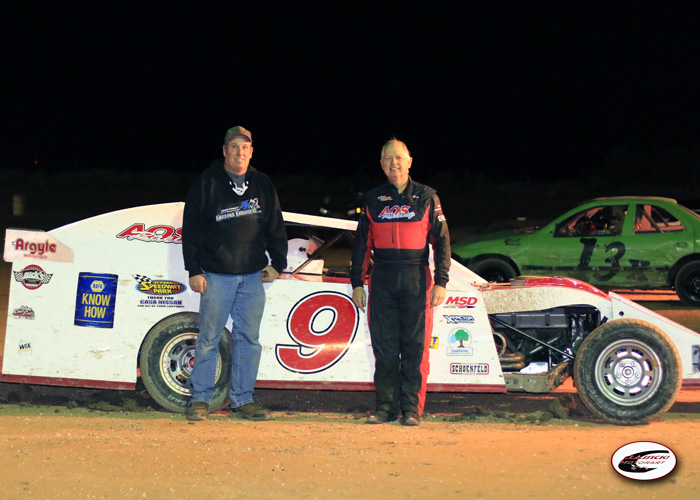 The Hornets had 12 laps and it was a good way to start the twelve lapper. Benny Pena, Ben Ives, Rudy Tarin Jr, Saul Delgado, AND Danny Carabajal battled for the lead!! Saul Delgado would end up overshooting turns three and four, and that sent him to last, then Rudy Tarin Jr would take the lead and run away from everyone! Danny Carabajal would disappear from the front, and the only battle that was left was for second between Ben Ives and Benny Pena! It was a good main for the car count!

It was a caution free main event for the Peter Piper Pizza Mini Sprints presented by Slime! Jerrad Warhurst would lead the first couple of laps, until the teenagers showed up to the party. Jett Carney, and Will Gonzalez would run first and second for a while. At the end, Will Gonzalez dived to the bottom of the speedway for the win, and came short by INCHES to Jett Carney. Jett carney would claim his third Southern New Mexico Speedway main event win, and 5th win of his career.

Twenty-Nine 305 Sprint Car drivers checked in for battle at the Southern New Mexico Speedway for the preliminary night of the 6th Annual 305 Sprint Car Shootout presented by Citizens Bank at the Southern New Mexico Speedway in Las Cruces, New Mexico. A B-Main race took place, and the top twelve transferred automatically. The top four finishes in the tonight’s preliminary night race get locked into tomorrows main event. PLUS the top four drivers that do get locked in don’t have to hot lap before the race, OR run a heat race or b-main.

Tonight’ 305 Sprint Car main was pretty interesting, the first lap of the 25 lap main, a caution would display as we had trouble between James Mosher, and Jerry Gonzalez in turn four. During the caution Aaron Reutzel would find himself with front wing damage. Aaron would have to go to the back of the field for heading pit side. Later in the race John Carney the II would lead the way with a smooth lead going for him until Tyler Thomas, and the Wofford’s started to put pressure on John carney the II. Later another caution would fly for Rick Ziehl spinning in turn four. Aaron Reutzel AGAIN went to the back for heading pit side.

After another era of cautions Aaron would make a come back to finish third! John Carney the II what looked like he could lead the main from flag to flag, wasn’t the case. Oklahoma racer Tyler Thomas pulled a “DYNAMITE” SLIDE JOB on John Carney the II on the final lap in turn one! Tyler Thomas would win the preliminary night of the 6th annual 305 Sprint Car Shootout presented by Citizens Bank!!

NOW Aaron Reutzel would get penalized for getting three push starts in this main event, therefor Aaron Reutzel would finish 14th in front of the lapped cars, and Wes Wofford will inherit the fourth transfer spot into tomorrows show. #305ShooutOut #Dynamite